“Hence the ways of men part: if you wish to strive for peace of soul and pleasure, then believe; if you wish to be a devotee of truth, then inquire.”
Friedrich Nietzsche

My belly is still stapled together, I’m covered in dressings and bandages and I have a bag of warm piss attached to the end my willy, but at least I’m out of hospital. I install myself on the sofa and Tori tucks me up in a blanket and hands me with the TV remote, I can take it from here. I may be partially incapacitated and voluntarily sofa-bound, but things are not so bad that I need to lower my standards and suffer a quiz for morons or an orange-hued spiv auctioning tat for the amusement of cretins on daytime television. Thankfully I have a well-stocked media server full of timeless comedy TV shows and films.

When I left work just before Christmas I confidently and naively predicted my return to work in about a week after my operation. What a guileless twat; I’m clearly going to be on this sofa for a fair few weeks yet. Especially frustrating as I’m still a freelancer until the end of the month and not getting paid. It looks like I’ve got plenty of time to kill though so I might as well start with the classics, Dad’s Army, season 1, episode 1, (you know the one where George Mainwaring the local bank manager hears on the radio that they’re forming the Local Defence Volunteers and decides to act).

After a couple of days, I’m settled into a nice routine, four or five episodes of Dad’s Army, lunch (lovingly prepared by Tori), and then a Stanley Kubrick matinee for the day’s main feature. The catheter actually turns out to be quite handy during the longer Kubrick films and eliminates the need for occasional pauses in the drama/action. In fact, I’m getting quite used to this catheter. The hospital has given me two sizes of bag that can be attached, a small one that can be almost discreetly velcroed to my inside leg should I fancy a brief stroll around the garden, and a larger bag which allows me to have a bit of a lie in of a morning without the worry of any messy overflow. The only problem is that I’m starting a new job in a few weeks time and I really don’t want to turn up to the office on my first day with a bulging bag of my own tepid tinkle in tow. 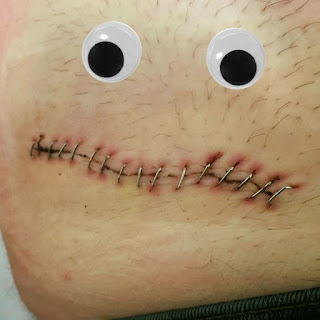 First things first however, and after a couple of days convalescing, just as I’ve finished episode 8 of season 3 of Dad’s Army, (you know the one where they capture the barrage balloon and then have to let it go when they salute a senior officer), I’m summoned to the GP surgery so the nurse can remove my dressings. Once removed the full extent of my adroit butchery is revealed. Like Chief Brody in Jaws, I‘m keen to proudly show off my scars. Shortly after posting my wounds on Facebook however, I notice that my friend Jonathon has kindly adorned my stapled flanks with a most agreeable pair of googly eyes. Thanks for that. Although now free of my dressings the GP surgery seems to be in less of a hurry to remove my catheter, I think they still doubt my ability to piddle properly.

I get a phone call from the recruitment agency that recently hired me for my new job and they tell me that my new employers want to know if I can come into the office before my official start date to participate in an all-day integration and verification strategy workshop. Ordinarily I’d be happy to, but I need to get rid of this pesky pipework first. I make a suitable excuse for attendance this week but agree to come in the following week in the hope that I will be liberated from my catheter by then. I called my stepfather, who is a GP, for some advice on successful urination techniques. He recommends a drug called Tamsulsin that should relax things and allow stuff to flow more freely once the catheter is removed. I ask my GP to prescribe some Tamsulsin and she kindly obliges and tells me to come back into the surgery in two days so the nurse can remove my catheter.

I take the pills as instructed by my GP and stepfather. Two days later, just after finishing the last episode in season 5 of Dad’s Army, (you know the one where the German pilot bails out and gets his parachute caught in the clock tower and the platoon climb up to rescue him and hilarity ensues), I make my way to the GP surgery for my catheter removal. As before it slips out fairly easily, I decide however not to test drive my recently liberated urinary system straight away. I want to get this right and wait for the right time, no cock ups. I’m not going to put any pressure on myself. I shall go about my usual business of watching Dads Army. I’m up to season 6, episode 2, (you know the one where they give a party for the American troops and the Yanks start getting a bit too friendly with Mrs. Fox and Pike’s girlfriend and it all kicks off), when the urge finally presents itself. I announce my intentions to the household and purposefully stride to the downstairs toilet. Tori waits just outside the toilet door with bated breath. I unzip, take aim, and pee. Oh what joy, what delight, my molars are tingling with ecstasy.

Bandages removed, catheter successfully extricated, the final step is to get my staples out. I have yet another appointment back at the GP surgery a few days later, just as I’d finished watching season 8 episode 3 of Dad’s Army, (you know the one where Godfrey’s cottage is due to be knocked down to make way for an airfield and no one can bring themselves to tell him, but in the end Fraser bribes the General to have the airfield moved). When I arrive at the surgery for my staple removal I’m asked by the nurse if the hospital have given me the correct tool for removing the staples. They hadn’t. Indeed, I didn’t realise that there was a special tool for removing the staples. I tell the nurse that I have a paper staple remover at home if that’s of any use but she just tuts and gets here own staple remover from her drawer. I didn’t see it properly but assume it is a special medical one rather than the ones by the tills in Rymans. Most of the staples just slip out effortlessly and painlessly but a couple manage to inflict a few final seconds of grief as they make their exit.

I’m thankfully emancipated now from my bandages, external plumbing and staples but there is however one final visit I need to make to the hospital. This is the scary one that I have been most worried about, I finally have the results of my biopsy. After my operation they took away part of the main tumour and a bit that they scraped off the side of my liver and sent it to the laboratory for analysis. It’s taking quite a while to get the results back, but I need to know; ignorance, as always, brings me no solace. I finally get a call from Mr. Campbell today but he doesn’t want to give me the results over the phone, he wants me to come in and talk about them. This sounds ominous. I was hoping that Chapter 10 might be the final chapter of my cancer scare story and not the just the end of the beginning of a cancer terror tale.

When I arrive at Mr. Campbell’s office the following day he’s surprised to see me walking so well, he tells me that he expected me to be less mobile after such traumatic surgery. When I spoke to Mr. Campbell on the telephone yesterday I asked him for some probabilities of the cancer returning, he didn’t have them to hand but said he would work them out in time for our meeting. Tori and I sit down next to his desk and I noticed he has scribbled a few sums on the back of my biopsy results and underlined a rather high percentage at the end of his calculations. I am told that the results of the biopsy are not what he had hoped for. The main tumour is indeed malignant and as it has spread beyond the kidney it is a grade four tumour. Grade four is the final stage, there is no grade five. The tumour is also given a score of three on the Fuhrman scale. Three is an aggressive malignant cancer, but not quite as aggressive as the highest Fuhrman score of four. This gives me an overall tally of seven, which I’m reliably informed is not good news. In terms of chances of the cancer returning, I am told there is a sixty percent chance of it returning in the next five years and a seventy percent change of it returning in the next ten years. If however, I can go beyond ten years without reoccurrence then I’m laughing. Indeed the longer I can go without the cancer returning, the less likely it becomes that it will return.

These are not the odds I was hoping for. I knew I would now be at high risk of reoccurrence, but I thought about a ten percent chance of reoccurrence would be quite high enough. I wasn’t expecting it to be more likely that the cancer would return than not. I’m starting a new job in just over a week. I was anticipating to be starting my new job cancer free with only a slight niggling worry about the cancer perhaps returning, not this highly unfavourable cancerous probability dangling over me. There’s nothing to do though other than wait for the next scan and hope for the best. They will check up on me every 3 months and if after a year it hasn’t returned they will reduce the frequency to either 6 monthly or yearly.

I shall be going back to work at Oxford University on Monday morning for my final week, but beforehand I need to finish the last episode in the final season of Dad’s Army, (you know the one where Corporal Jones marries Mrs. Fox but the invasion alert goes up and he has to spend his wedding night on guard duty by the beach).