Chapter 52: Awfully Sorry For Whinging But…

The perception of how well I am doing will depend entirely on the social media type you use to keep up with my progress: 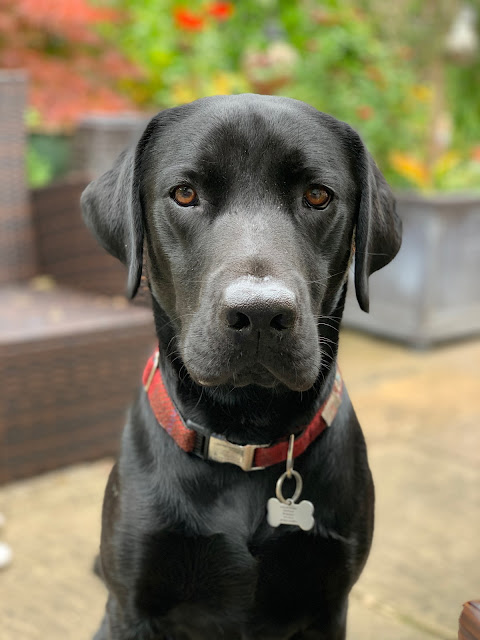 The only people therefore with an accurate perception of how well I am doing are those who actually live with me, my wife and my son, incidentally the girl has now has now got her own place in London – we’re looking forward to seeing her this weekend, social distancing rules permitting. I therefore intend this particular post to be a slightly more realistic reflection of my progress than much of my social media might suggest. Firstly, however, as I have not blogged for so long, it will probably help if I write a short summary of what has happened since my last post to bring everyone fully up to speed.

Looking back at my previous post I see that when I left you last I was awaiting treatment for a newly discovered brain tumour and the fervent arrival of our new black Labrador puppy. Both of which events, I can now report, successfully came to pass, and as the brain tumour subsequently shrunk so the new puppy grew, although of course no causation should be drawn between the two. By far the most traumatic effect of my brain tumour, was not the anxiety, the head aches or the cunningly targeted radiotherapy treatment, but the loss of my beloved driving license. I had, by this point, become accustomed to the metastasis in my lungs, liver and bones remaining relatively stable so as my brain tumour started to shrink, I happily counted down the months until I could reasonably reapply for my driving license. Then a routine CT scan revealed the cancer in my body had once again slowly started outwitting the drugs and gradually making back some of the lost ground in my lungs and liver. Rather than abandoning the treatment straight away, my oncologist opted instead for upping the dosage. The increased dosage bought me another six months or so but at the cost of greatly increased side effects. Indeed, these side effects had become so bad, I was actually quite pleased when Dr. Wheater finally declared my Cabozantinib to be failing and an alternative treatment now required. The only problem with this approach was that awkward fact that I had now used up all of my NHS goodwill tokens and as a terminal cancer patient seeking a fourth-line treatment, the best the NHS could offer was palliative care to make my final months as comfortable as possible. My oncologist however advised me that now would be the ideal time to play my private healthcare trump card. I did as he advised, and a few days later found myself back in a private consultation with Dr. Wheater and, thankfully, the door now opened to some potential new evidenced-based treatments. The treatment he recommended was a combination of chemotherapy (Axitinib) and immunotherapy (Pembrolizumab), which, as it happens, are the current drugs of choice for the NHS for first-line treatment of new kidney cancer patients. I’ve been on this double whammy of drugs now for the last nine months and, I’m delighted to report that once again I’m responding very well to the treatment and my tumours are, yet again, shrinking back down again. So, things are looking up again, and the best news of all is that I finally got my driving license back last week. Of course, there’s the constant worry not only of the treatment failing again (which it will do eventually), but also of losing my job and therefore my private health treatment, not to mention the distinct possibility of the re-emergence of another brain tumour and losing my driving license again. Putting these fears aside though, things aren’t so bad, indeed, from the perspective of my rose-tinted Facebook posts things are totally tickety-boo.

Things probably seem so terrific to my FB feed because as I don’t especially enjoy reading about other people’s travesties and misfortunes on the Book of Face, I’m not especially inclined to share mine either. As much as I enjoy a bit of attention from plastering my endless updates over social media my narcissism does not yet extend to seeking sympathy, you can save your “U OK Hun?’s”’ for those more deserving than me. So, despite regularly glossing over the all too frequent bad days and the persistent side effects on my usual Facebook updates, I thought I would use this post to acknowledge them. But hopefully not garner too much pity as I really don’t want to seem to be ungrateful or whinging after the great support and treatment I have received from all of my amazing doctors, nurses and health care professionals. Indeed, I value our NHS so much (even though they can no longer efficaciously treat me), that I don’t merely applaud them in the street to feign my support, I actively vote against a government who don’t truly value them, pay them fairly and are desperate to sell them off to the highest commercial bidder.

So to finally get on to my side-effect whinge, perhaps I should start with what is probably the most troublesome, my extreme tiredness. It’s had to describe my constant lack of energy without making it sound like laziness. I like to think that I am a reasonably well motivated person who gets shit done. Before spending my days lying in bed or slowly pottering around the house, I did take on some hefty responsibilities that I took suitably seriously. I often lie in bed thinking of when I designed and implemented the over-arching engineering test strategy for the Airbus A380 and rolled it out across the major Airbus sites in Europe. Or when I oversaw the full testing and deployment of latest release of the command and control systems used by the British Army in theatre. Or the full management of the testing of the new call-handling and dispatch systems for the London Ambulance Service or the complete testing of the Student Information System at the University of Oxford. Indeed, at this very moment I should be busily beavering away as a senior architect working on the integration and verification of the next generation of pan-European air traffic control systems, and yet the most I can manage is rolling out of my bed mid-morning and heading to my workshop to cobble together a wooden coffee table for my friend. Despite 10mg of prednisolone (steroids) a day I simply just can’t hack anymore. Before I was ill, I slept on average around 6-7 hours per night, now I sleep around 11-15 hours per night and frequently have to have an afternoon nap and often even spend the entire day in bed because I’m just so knackered. Even, the good days, when I do manage to get the odd thing done, its usually only a couple of hours before I have to stop for a breather. I know sleeping isn’t exactly the hardest thing in life to endure, but I nonetheless find it frustrating the amount of it I need. I’m extremely grateful that my employers have left my job open for me, I’m not sure how realistic it is, but leaving the employment door open for me does give me some hope and something to strive for.

The next most frustrating side effect is the diarrhoea. Again, this initially sounds like a mere minor inconvenience, but after nearly 5 years of it, it is tedious beyond belief. There are many evenings when I simply cannot stray more than a few metres from a vacant and well-stocked toilet. My wife and I love a good crime drama on the telly, but I estimate she’s spent a quarter of the time just watching poor old DCI Vera Stanhope grimacing on freezeframe while I rush off to the bog for yet another episode of my own shitty performance.

The nausea, occasional vomiting and constant side pain despite my daily dose of morphine are just part of daily life now too. I’ve tried to stop mentioning them because they’re just the norm now and I’m still far happier to put up with them than not still be here. I’ve already survived three times longer than originally predicted and have seen far more than I ever expected to, not only did I survive long enough to see my daughter graduate with a first class honours degree in archaeology from Durham University, I’ve also now survived long enough to see my son graduate with his first class honours degree in Graphic Design and Illustration from Loughborough university, although thanks to Covid, I’ll need to hang on for another six months or so before I  can actually see his graduation ceremony.

So, if the price I have to pay for my continued sentient occupation of this Earth is bit of tiredness and nausea and the unenviable ability to shit through the eye of a needle, I’ll gladly pay it.

Oh, and here’s a video of the making of that coffee table I mentioned earlier.