Today is Tuesday the 2nd January, 2018. I tell you this because it is an exceptionally significant date for me. Today I am celebrating the anniversary of the two biggest truly life changing events of my lifetime.

Firstly, today Tori and I are both celebrating our 30th wedding anniversary. I’ve made some pretty smart decisions over the years, even if I do say so myself, but uttering the simple phrase “I do” thirty years ago today was by far and away the sagest words I’ve ever uttered. I could go on about how I don’t think I would have been able to have made it through my various operations, treatments and chemotherapies since my diagnosis without Tori, but the same sentiment applies to pretty much everything else I have done and been through in the last thirty years. She has not only supported me during my cancer, she has been there for pretty much everything I have ever achieved or done, quietly sitting in the wings making sure everything runs smoothly. She doesn’t have a fancy job title, she doesn’t seek out the lime light, she doesn’t blow her own trumpet or make a fuss, and as such many people have underestimated her – this is always a mistake.

Today however is not just our 30th wedding anniversary, it is also exactly 18 months to the day since I sat in Dr. El-Saghir office and was told that my cancer had returned, spread to multiple organs and had become inoperable and indeed terminal. I was told that there was no cure and that I needed to make sure that my affairs were in order. I didn’t ask how long I had, it seemed like a rather unfair question, but I was told anyway. I was told that I had 18 months to live. Obviously I understood the various caveats that accompany such a prediction. His estimate was based on the average life expectancy of patients with the same diagnosis as me, however, there is a great deal of variation between patients and how they respond to different treatments and as such the life expectancy between different patients will vary greatly. There may well be a fair amount of deviation between individual patients but alas ninety-six percent of patients with my condition are no longer alive five years after their initial diagnosis, the chances of a long life are therefore very poor indeed. Not withstanding these caveats and unknown variables, upon receiving this dismal prediction I nonetheless thought it an interesting experiment to make a note of the date exactly 18 months hence, just to see if I do better or worse than average. Today is the day I noted. Today is the the day I am supposed to die. Dr. El-Saghir didn’t actually specify the exact time that I will shuffle off this mortal coil, but I assume he meant sometime before midnight tonight. It’s only about lunchtime as I write and I don’t want to get too cocky just yet, but I’m actually not feeling too bad at the moment in fact, I’m pretty confident that I’ll see the day through and beat Dr. El-Saghir’s pesky pessimistic prophecy.

As for how long I actually have left, I really don’t have a clue, and Dr. Wheater is far too canny to bandy about a fresh new expiry date for me to jot down. We did however have another quick consultation between Christmas and New Year. Despite my brief wheelchair enabled foot break during our recent trip to Disneyland Paris, the continued sorry state of my feet had suggested to me that I was still struggling with the chemotherapy side effects. I therefore lowered my dosage once again at Christmas down to just 20mg/day. On hearing of my self-prescribed reduction Dr. Wheater confirmed that this was probably a sensible move and recommended continuing on this new lower dose. In addition to my sore feet I’d also noticed that my abdominal pain has been increasing recently so Dr. Wheater instructs me up onto his examination table to give my paunch a damn good prodding. Despite my whinging he could feel nothing untoward that could be the likely culprit. He did however think that it’s about time for another CT scan to get a more quantifiable measure of how the cabozantinib is actually shaping up against the cancer. It would be nice to believe that the pain in my side is associated with the chemotherapy working and shrinking the cancer.  It however seems just as likely that pain is caused by the cancer growing again, or even some sort of liver problem caused either directly by the cancer or indeed the chemotherapy. So when it comes to the non-mooted question of how long I actually have left, it would come as no great surprise to learn that I am down to my final few months, and it would be equally unsurprising to discover that the chemotherapy is working as planned and I that have a bit more life left in me yet.

My next CT scan in a few weeks’ time should shed a little more light on the situation and although I’m not expecting a new revised death date, I am hoping that I can get an idea of whether or not its sensible or not to book myself a few more trips and holidays early in 2018. As I become more accustomed to living with cancer I have also begun to realise that it is now the quality of my remaining time I have left rather than the length of it that is more important to me. As far as quality of life goes, last year was actually a surprisingly good year. I may well have undergone a shitload of chemotherapy, immunotherapy, radiotherapy, blood transfusions, lung drains and a major operation in 2017 but there was more than enough good stuff in between to make it more than worth while, and it’s also made me greedy for more good times in 2018. If I’m to see the end of 2018 as well though I am really going to have to continue to defy the odds, but I never had a great deal of respect for the odds anyway, so bugger them.

Today may well be the arbitrary day of my anticipated death, but the fact is I’m still bloody here and I’m not ready to go just yet. From here on in every day is an additional bonus gifted to me by science based medicine and I will strive my best to ensure that each of these subsequent days will be truly relished. 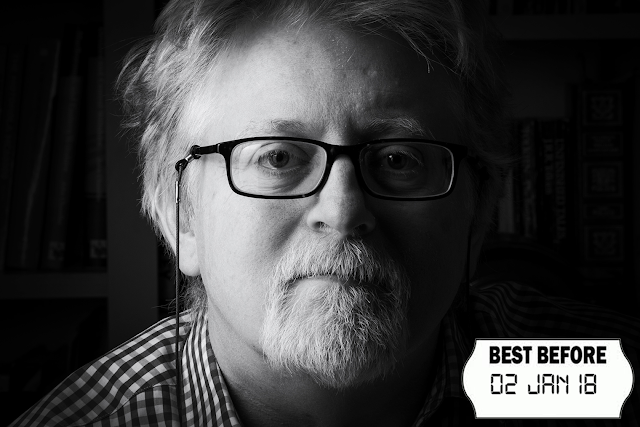 Chapter 43: We're Going On A Cancer Hunt
Posted by Crispian Jago
Email ThisBlogThis!Share to TwitterShare to FacebookShare to Pinterest