“1. Santa Claus is real. However, your parents are folkloric constructs meant to protect and fortify children against the darknesses of the real world. They are symbols representing the return of the sun and the end of winter, the sacrifice of the king and the eternal fecundity of the queen. They wear traditional vestments and are associated with certain seasonal plants, animals, and foods. After a certain age, no intelligent child continues believing in their parents, and it is embarrassing when one professes such faith after puberty. Santa Claus, however, will never fail us.”
Catherynne M. Valente


I love Christmas. Both the kids love Christmas too, but the undisputed queen of Christmas is Tori (although admittedly she does sometimes have a little bit of help from Nigella). Tori starts baking cakes, boiling jams and pickling the vegetable plot in October. The highly detailed menus and guest invites are generally finalised by mid-November. Yew, holly, fir and whatever red berries that can be found are gathered on the last weekend of November and no less than 3 yule wreaths painstaking constructed to adorn not just the front door, but the garden gates too on the first day of December. When it comes to Christmas, my wife doesn’t fuck about.

When our children were much younger we went to a school Carol Concert at our local church. I love a good sing-a-long to some traditional Christmas Carols – who doesn’t? Amidst the festive singing of the children the vicar took the opportunity to unleash a ranting sermon blatantly aimed at the heathen parents like me that no longer routinely grace his ever-dwindling flock. I was quite looking forward to the retelling of the traditional tale of Mary and Joseph’s inability to book ahead and their cosy stopover with adorable livestock. Alas we got a sanctimonious and misinformed bombast on why he disagreed with Richard Dawkins’ view on the natural evolution of morality. His sermon was so woefully constructed and full of ill-informed fabrications that I felt duty-bound to boo him. The dig in my ribs from Tori however reminded me that it’s still generally regarded to be bad form to boo the vicar – even if he is clearly talking out of his arse.

That’s not to say that the baby Jesus lying in a manger surrounded by extremely well toilet-trained livestock isn’t a vital and welcome part of the imagery and tradition of the season. In fact, we always have a nativity scene in our hallway, although mainly because I get to go up in the loft every year, hunt around for it, and then proudly proclaim to my atheist friends on Facebook that “I have found Jesus – he was under a box of tinsel, next to the fairy lights”

So I’m happy to sing Christmas Carols and play along with the charming baby Jesus stories, it’s just that he’s not at the centre of a twenty-first century Christmas any more than a barefooted John McLane in the Nakatomi Plaza or grumpy TV executive Frank Cross being violently punched in the face by the angelic Ghost of Christmas Present.

The modern Christmas traditions we’re all familiar with (at least in the western hemisphere) have been drawn from Christian, Pagan and Secular sources, and they ALL add value. If we map them onto a Venn diagram there’s quite clearly someone else at the centre of our Christmas traditions and, thankfully, he does not concern himself with our arbitrary faith boundaries. 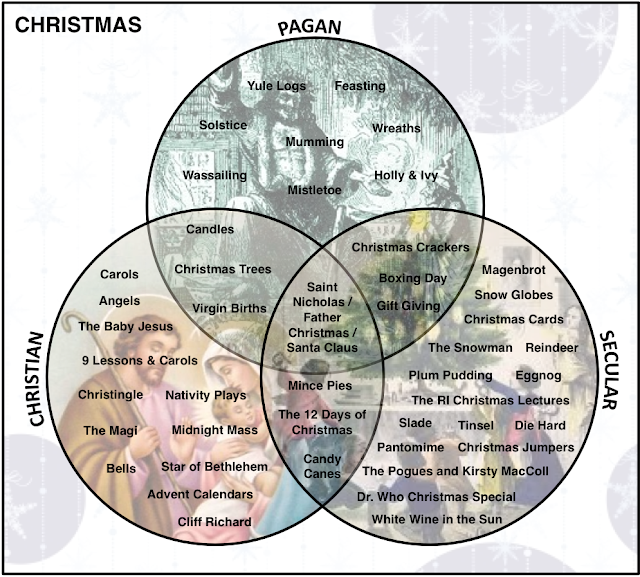 Those who claim that Christmas is under attack from the politically correct forces of secularism and consumerism are merely trying to purge the season of its equally worthy non-Christian elements.

My advice would be to be wary of any one set on this Venn diagram who try to claim sole ownership of the winterval. The true spirit of Christmas is not about hijacking the seasonal festivities for the exclusive celebration of one particular ideology. Christmas is for everyone, Christians, Pagans, Atheists, Agnostics and adherents of any other conceivable faith group who would care to come and pull a cracker with me.

Except this year, I’m not really in the mood for pulling crackers this year. I’m a tad nervous of pulling anything in case I dislodge another piece of cancerous kidney and need to go back into hospital to have it escorted out again. This Christmas is all about quietly eating, watching the TV and patiently waiting for the 29th December when they will cut this bloody thing out of me.

I’m rather looking forward to next Christmas though, perhaps we will be celebrating my one year all clear, if not I shall do my upmost to ensure I don’t die at Christmas and bugger up all of Tori’s future Christmases.